For some years now I have been doing storyboards  for cg productions. Generally speaking I would  approach it the same way as I would for a traditional  or flash show. Visual storytelling driven by strong characters. A major difference I noticed is the freedom of not having to stay 100% close to model (drawing wise) and having the freedom of using a flexibel camera. On his website,  story artist Giancarlo Volpe published some of his own notes about storyboarding for  cg animated films, which he used on the production of the animated "green lantern". Its a great take on the subject. There is little common ground between productions and  artists on how and when to handle the virtual cameras in the storyboarding process.  From sticking to traditional 2d use (pan, truck in/ out), to animated bg, to camera setups. I believe CGI and storyboarding for cg productions has brought storyboarding much closer to life action film production when it comes to the use of cinematography. More and more the creative split is between the story-reel and the layout or previs reel. Personally I find the use of grids (horizon line and perspective lines) in storyboarding crucial. also use as a guide for the camera setup as it is more common in life action productions If you are interested on the subject also have a look at Ben Caldwells Blog. More precisely his post "storyboard tip sheet from dreamworks."
happy storyboarding everyone! 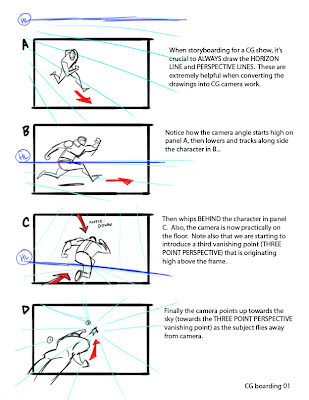