Seasons Greetings to all of you. Thanks for following my artwork throughout the year!

On this side of the pond everything is covered in freezing snow in time for Christmas. 2010 was an exciting year for me and all the signs promise more good things to come in 2011.  I feel very lucky to be part of so many interesting projects, also to have the pleasure working with amazing artists all over the world. Two of the projects will finally be aired in 2011. "Bubble Guppies" from Nickelodeon  I worked on the TV show almost 3 years ago and it now seems to be scheduled for 2011. The second one is Lauras Stern und die Traumonster, which is scheduled for theatrical release later on in 2011 on which I boarded a few sections. 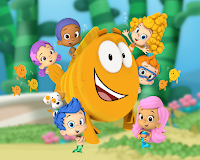 I particularly enjoyed working with students in 2010: I learned A LOT  from you, thanks to all of you in case you make it to my blog. If the airports will be open for business again I will do a little talk in Dublin about the industry on the 8th of January at the ISA. My first time back in Ireland since 95. Hope to see some of you there.